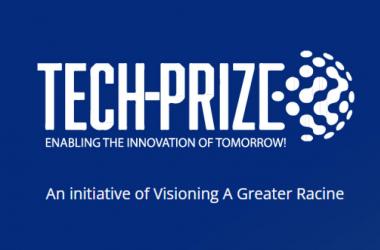 In today’s day and age, technology is everywhere from our schools to our homes, so why not also use it to improve our community? That’s the goal of Tech-Prize, which is a competition designed to foster innovative ideas by bringing together entrepreneurs and innovators from around the world to brainstorm ways technology can make Racine a better place.

So who are the competitors? Well, they include two current RUSD students: Macy Flanagan, a senior at Case High School, and Malea Pina, an 8th grader at The R.E.A.L. School.

Pina had always been interested in technology and found herself intrigued when her teacher brought up Tech-Prize’s app-designing competition.

“I was reading a book actually, and it sort of gave me the idea,” says Malea, “Then, with online school, it helped boost the idea.”

Pina conceived an app called Homework Help, which is designed for kids to help one another on homework problems. The app would allow students to send out a question and then another student who knows how to solve it could answer them.

The Tech-Prize judges loved her idea and awarded her first place in the Idea Competition which came with a $1,000 cash prize. In addition, UW-Parkside is taking her idea back to its App Factory to see if they can turn it into a live, functioning app.

Flanagan took part in the Code-A-Thon as part of a four-person team that created an app to help combat food deserts in Racine. Flanagan and her team worked on the app tirelessly, even working 12 hours straight on the first day. In the end, all their efforts paid off when they won first place in the Code-A-Thon competition.

Each member of the team received a 4-year scholarship, up to $1,000 per year, for Gateway Technical College. Macy says that she’s unsure about where she wants to go to school, but she plans to pursue a career in coding.

“I like the idea of putting my creativity into use for the community,” she said.